A summary of the flagship’s first year

The Photonics Research and Innovation platform consisting of the four partners was selected as to the Academy of Finland flagship programme in January 2019. During the first year as a flagship, we have been ramping up our activities.

The official launch of the PREIN programme was celebrated with all the PREIN researchers at the Optics and Photonics days organized in Aalto in May. From hereon the Optics and Photonics Days will gather together all PREIN members annually. We have organised several internal PREIN meetings for the Management Group and Steering Committee and meetings with internal support services like communications and LUMA-centers. The PREIN Stakeholder Committee meeting in November with external stakeholders representing industry, funding bodies and Ministries probed the possibilities to cooperate in outreach and policy actions. 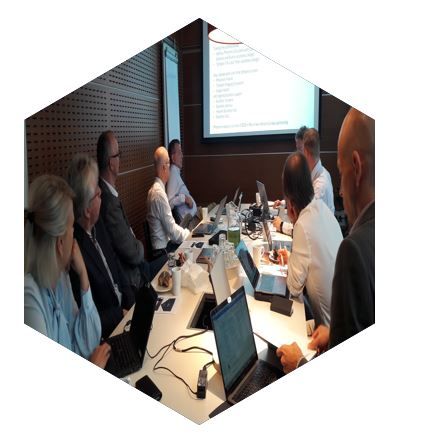 In the spring, PREIN opened its own website and a Twitter account (@flagshipprein) and launched the PREIN newsletter in the autumn. These channels have gathered visitors, followers and subscribers and increased awareness within the flagship members and external stakeholders on ongoing research and activities in PREIN.

We have increased our visibility also in local, national and international media as there are news articles published, news on television and radio about photonics and the PREIN flagship. There were over 20 PREIN related news (on photonics, PREIN or the PREIN researchers) published in media in 2019 with increase towards the end of the year. News in Finnish media is collected to Suomeksi -page.

The flagship and its researchers have been acknowledged during 2019 with significant awards and prices: Professor Zhipei Sun received the ERC Advanced Grant awarded by the European Research Council; PREIN received a prize on research impact in the opening ceremony of the academic year at Aalto University; Professor Mircea Guina was nominated OSA fellow and Professor Goëry Genty received the Väisälä prize of the Finnish Science Academy.

Research in PREIN is organised in work packages (WPs) that increase collaboration between the PREIN partner organisations. The work packages have prioritized their short-term research aims and listed their expertise. The WPs report on their progress and scientific outcomes for internal and external evaluation. The research results have been published mostly in top-level journals. There are around 230 scientific publications, by PREIN researchers in 2019. PREIN publications are collected on the Publications webpage.

In order to increase its visibility to the national industry, PREIN has organized thematic events where different actors from a specific sector participate to discuss applications of Photonics technologies in the sector. The meetings are organised in close cooperation with Photonics Finland. Highlight of 2019 events include:

A clear indicator for the increased cooperation with industry and the flagship is the 40 % increase of funding from industry compared to 2018.

On the international scene, PREIN was present at the LASER World of Photonics in Munich at the Finnish Photonics booth together with 8 Finnish Photonics companies to promote our research activities and offer our services and expertise to potential industrial partners.

In the PREIN doctoral education the number of doctoral degrees completed in photonics was 22 in 2019.  Summer schools aimed at doctoral and postdoctoral researchers were arranged in Tampere and Joensuu.

Within the flagship framework, multiple workshops have been organised to raise awareness for the general public of the critical role that Photonics and light-based technologies play in our lives. Events targeted at children and youth included:

As part of policy related action in the flagship programme PREIN participated in meetings with the Finnish Academy and all the flagship representatives, a meeting with the Ministry of Education and Culture and the Team Finland Knowledge network. The vice-director of the flagship Jyrki Saarinen gave a presentation on the impact of the Flagship programme and PREIN particularly and participated in the panel discussion on scientific impact at the Research Services days targeted at university and research organisations’ and Ministry and Academy of Finland representatives.