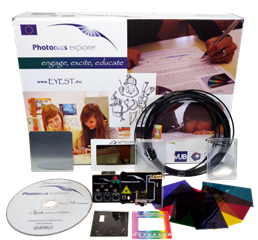 Photonics is a quickly growing field of science and technology that has an increasing demand for talented workforce to fill the requirements of both the industrial and academical sides of the field. To meet these needs in the future, young students are to be encouraged to study science, technology, engineering, mathematics (STEM) subjects at an early stage. In the field of Photonics (light-related physics), this can be achieved with the Photonics Explorer Kit.

The Photonics Explorer Kit (PEK) is an intra-curricular educational kit with a focus on experimental light-related physics, especially relying on hands-on work and utilizing scientific methods. Experiments are possible with over 110 high-class and durable components, such as lenses, LED and laser modules, diffraction gratings and polarizers.

The components are used in experiments and tests that teach students the physical phenomena related to e.g. data transfer, optics and colours, diffraction and interference. The large number of components allows all the students in the class to engage in experiments simultaneously.

In addition, to make it easy to include the PEK in the curriculum, teachers utilizing PEK receive ready-made lessons and supporting materials as well as experimental instructions for the students in 16 different languages (English and Finnish included). Teaching physics has never been this simple and engaging!

The PEK as an educational kit is aimed towards lower and upper secondary school light-related physics courses and is divided in to eight separate modules - four for each level of education. However, due to its experimental focus, it can easily be modified in vocational education as well.

The PEK has been very popular worldwide, and over 3500 kits have made it possible for hundreds of thousands of students to learn photonics in an early stage of education. One PEK costs 150€ (0% VAT) from EYESTvzw. Over 80 kits have been distributed in Finland with one kit reaching hundreds of students over many years.

To reach more and more schools in Finland, PREIN and Photonics Finland have begun a campaign in which photonics companies and persons related to the field are sought to sponsor kits to e.g. nearby schools or schools where they have studied previously. The sponsor gets their logo and leaflet in the sponsored kit, and for each sponsored kit, PREIN and Photonics Finland will both sponsor one more kit to their designated targets. This way one sponsored kit leads to three kits in total!

Donating a Photonics Explorer Kit is easy, just fill in the donation form!

Thank you to all the donors!